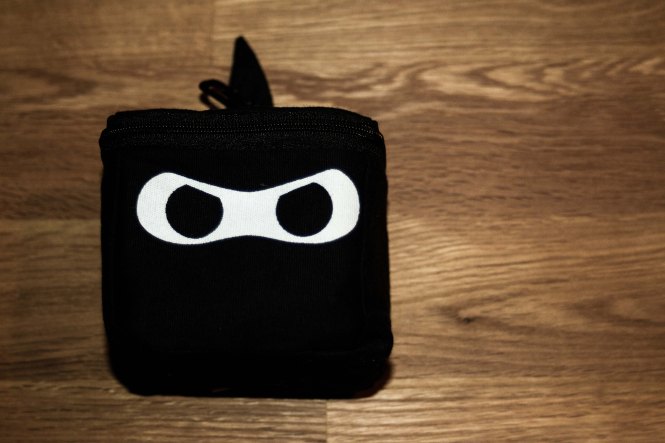 What is Ninja Dice?

It comes in a neat little black soft cube styled as a ninja which holds everything – dice, instructions, with room for expansions.

The aim of the game is to roll a ‘house’ which players’ characters must then enter and defeat to claim treasure and become the most powerful ninja.

I missed the original Kickstarter project for this game, and I’ve always found it hard to find in the UK.

So when a Kickstarter went live for its expansion, Kage Masters, offering a copy of the original game, plus its even-harder-to-find Location Cards mini-expansion, I signed up.

In this review, I’m going to take a look at the original game, plus the Location cards, and leave Kage Masters until another day (I’ve not played it yet!).

Ninja Dice is made up of black House dice, and white Skill and Threat dice.

Each round the House dice are rolled to create a unique scenario for the active player, or ninja, to try and beat.

House dice represent locked rooms, residents and guards. The active ninja then uses their Skill dice to try to overcome these challenges – dice have faces representing lockpicks, a sneak ability or combat ability. There is a also a Fortune face, which multiplies the abilities of other dice.

If the active player does doesn’t defeat the house on their first go, they can push their luck and roll again.

However, there is a player-versus-player element in each round – whenever the active player rolls their Skill dice, the other players can roll their Threat Dice, which represent hour glasses (these are kept to one side and if four are rolled the round is over with no points) attacks and defence. 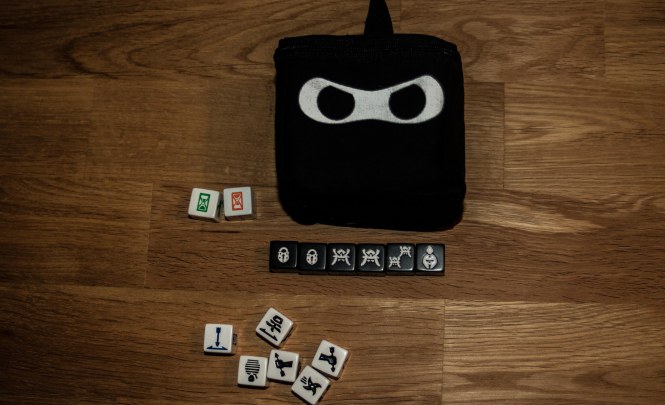 Where Ninja Dice differs from other similar dice game, say Zombie Dice for instance, where the dice land as they are rolled makes a big difference. It’s a bit of a gimick, sure, but works fairly well.

The attacking players can claim one treasure token from other players if their dice land in such a way that they point to the other players’ dice. I’ve not seen this mechanism used before, where the position of the dice makes just as much difference to the game as what symbol they roll.

The game is played over three rounds. Each round one more house dice is added so the challenges become progressively harder. More luck (or Fortune) is required to defeat the house each time. At the end of each turn, treasure tokens are given out representing the number of challenges in each house that were overcome (and a bonus for a full house).

In the Location Cards expansion, players choose from scenario cards their Ninjas must defeat. These cards may add extra challenges to the house dice, or a rule that has to be met. If these cards are completed, additional treasure is allocated.

So far I’ve played both two and three-player games of Ninja Dice and both worked well.

It’s a great playing experience, components are good quality, the rules are simple but not childishly so. Turns do offer genuine choices for the active player, and the hourglasses accumulating pose enough of a threat to make these choices mean something.

In a three player game you don’t feel like there is much waiting around. Turns are over fast anyway, but when other players get to roll their Threat dice regularly and potentially claim treasure from other players, there’s not really any downtime.

The Threat dice are a bit of gimmick, but I can see it working better with a confined space – a dice tray, so there can be no arguments. There is a great looking, wooden-etched dice tray available which represents a Japanese style fighting dojo.

As a two player it’s very effective. It’s a great filler game for between other, larger games, and because of its size is really easy to carry with you, and looks good enough to get people interested when you bring it out.

I’d highly recommend the Location Cards. They take a simple dice game and elevate it, offering new challenges, rules and rewards, and if you spend time reading the cards, increase the theme.

2onboard rating: Recommended. Especially with the Location Cards.

Take a look at the game’s official page here.