I love playing games, but I also love hearing from the minds behind them – how did you come up with the idea? What inspires you? What games do you play?

I’m in awe of people who can take an idea and develop it into a functioning, exciting, clever game with strategy.

On that note, I’m delighted to unveil an interview with Chris and Johnny O’Neal, founders of Brotherwise Games and creators of Boss Monster and recently its sequel.

I’ve made no secret of the fact that Boss Monster is one of my favourite games, and it was a real privilege to hear how Boss Monster came about, and what plans the pair have for their growing business.

So sit back and read up on selling out a first print run, funding a game through Kickstarter, and what’s next for Boss Monster.

I hope you find it interesting. 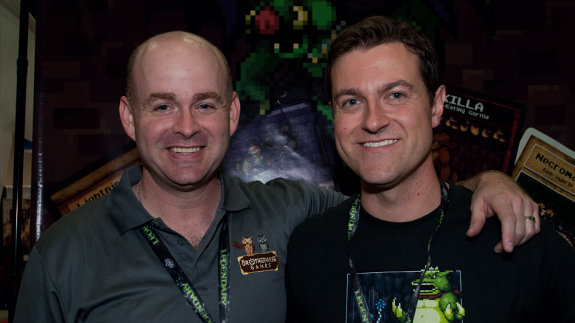 From backing a number of Kickstarter projects now, I appreciate a bit more that game design and publishing is not what most people imagine. It takes time and a lot of effort to get a game into shops that people will actually want to play. Can you talk us through the process you went through, from having no experience, I believe, to becoming successful designers? Any highpoints (or lowpoints), and tips for people in a similar position?

We’re fond of saying that making a game is about 5% of the work of getting it to the table. Despite the tremendous leg up that Kickstarter can give a game, distributors and retailers remain the workhorses who will get your game into the hands of players. Be prepared to be a good business person to get your game out there, and be prepared to work your butt off.

After Boss Monster’s Kickstarter success, we did what every company with a game does. We started shooting off emails to distributors that basically said, “please buy our game.” Orders were small at first (folks are generally nervous about Kickstarted games, even the big hits), but gradually they started to grow, until suddenly we were struggling to fill orders. It was crazy. It was exhausting. And it was really, really awesome.

It really helps to have a partner you work well with. As brothers, we’re lucky that we’ve always gotten along and our talents complement each other a lot. We can be painfully honest with each other and then hug it out at the end of the day.

Lastly, prepare yourself for rejection. Lots of it. Right now the market for games is stuffed to the gills with terrific and not so terrific products. It doesn’t matter if you’ve created the next Catan, the odds are still very high that it will disappear into the marketplace if you 1) don’t get the right people behind it, and 2) aren’t horribly lucky. But the only way you’re going to find out if you have a hit game in you is to try. I know this cliche gets thrown out a lot, but it is really just pure math. If you don’t put your game out there, your chance of getting it published will always be zero.

You’ve just launched Boss Monster 2 (which, as a Kickstarter backer, I’ve received and haven’t had time to play/review yet! Family life sometimes gets in the way of gaming!). How did this sequel come about – was it always at the back of your minds that Boss Monster 2 would be the obvious next step?

Definitely. We knew there was plenty of design space to take advantage of in the world of Boss Monster, so we had started designing Boss Monster 2, practically from the moment BM1 was out the door. We were (and remain) very happy with Boss Monster 1, but we also learned a lot from the process of creating it and watching it grow, and there were things we wanted to add to that game world. BM2 gave us that opportunity, and future expansions in the Boss Monster world will see even more growth and evolution of the game space.

What has been the reaction so far to Boss Monster 2?

Awesome. We sold out of the first print run before it was even finished printing. Reviews have been good, and we dare say Boss Monster 2 is even better than the first one. We’ve added in a little bit more cross-table play, and bit more synergy between rooms, without taking away from the fun and simplicity that have made the game a hit across demographics.

Tell us a little about Brotherwise Games? With two successful games under your belt, has the company grown since those early days or is it still a pretty tight-knit team?

Brotherwise has done great as a small company, but we have no intention of getting complacent. Chris will be going full time on the company, starting this September, and he’s excited to have the best job in the universe (honestly, this is a dream come true), but we aren’t letting this success go to our head. We want to keep making games for some time, and that means staying lean and mean.

What plans do you have for the future? Are you already planning your next venture or will you take some time to recover – and will these plans include further Boss Monster projects / products?

Oh yes, many plans for the future. Boss Monster is likely to remain our flagship for some time to come, and we promise our players we’ll be working hard to keep that line fresh. But other projects are in the works, and we’re now venturing into the world of publishing non-Brotherwise-created games. Since Chris will be going full time on Brotherwise we’ll see many more projects coming from the house of ‘Wise.

Has anything surprised you about the gaming industry? I know Kickstarter for instance, can be a fairly ruthless place but the gaming community as a whole can be a very close one when it wants to be.

We’ve been blown away by the kindness and acceptance we’ve met in the gaming industry. Practically everyone we’ve interacted with, from players, to retailers, to distributors has been excited for us, easy to work with, and a valuable collaborator. There are always going to be tough interactions with customers when you make a product, and Kickstarter can magnify that because backers feel some ownership of the product. But we love the passion that our players bring to the game, and to the Kickstarter campaigns.

Conflict in a creative endeavor like making games is not a bad thing. Our grumpiest players have given us great ideas for how to improve the line, and how to target our products in the future. If you’re someone who’s going to really take offense at someone critiquing your product, game design is probably not for you. But if you can hear the passion behind the critique, and work with that, you’ll be amazed what your players can do for you.

Finally, what are your favourite games?

We’ve gone on the record as saying that War of the Rings is a mutual favorite. It’s just so wonderfully thematic. Chris is a big Heroclix fan, while Johnny is currently jonesin’ on drafting games. Both of us have a background in D&D and MTG.

3 thoughts on “Interview with a designer: Boss Monster’s Chris and Johnny O’Neal”