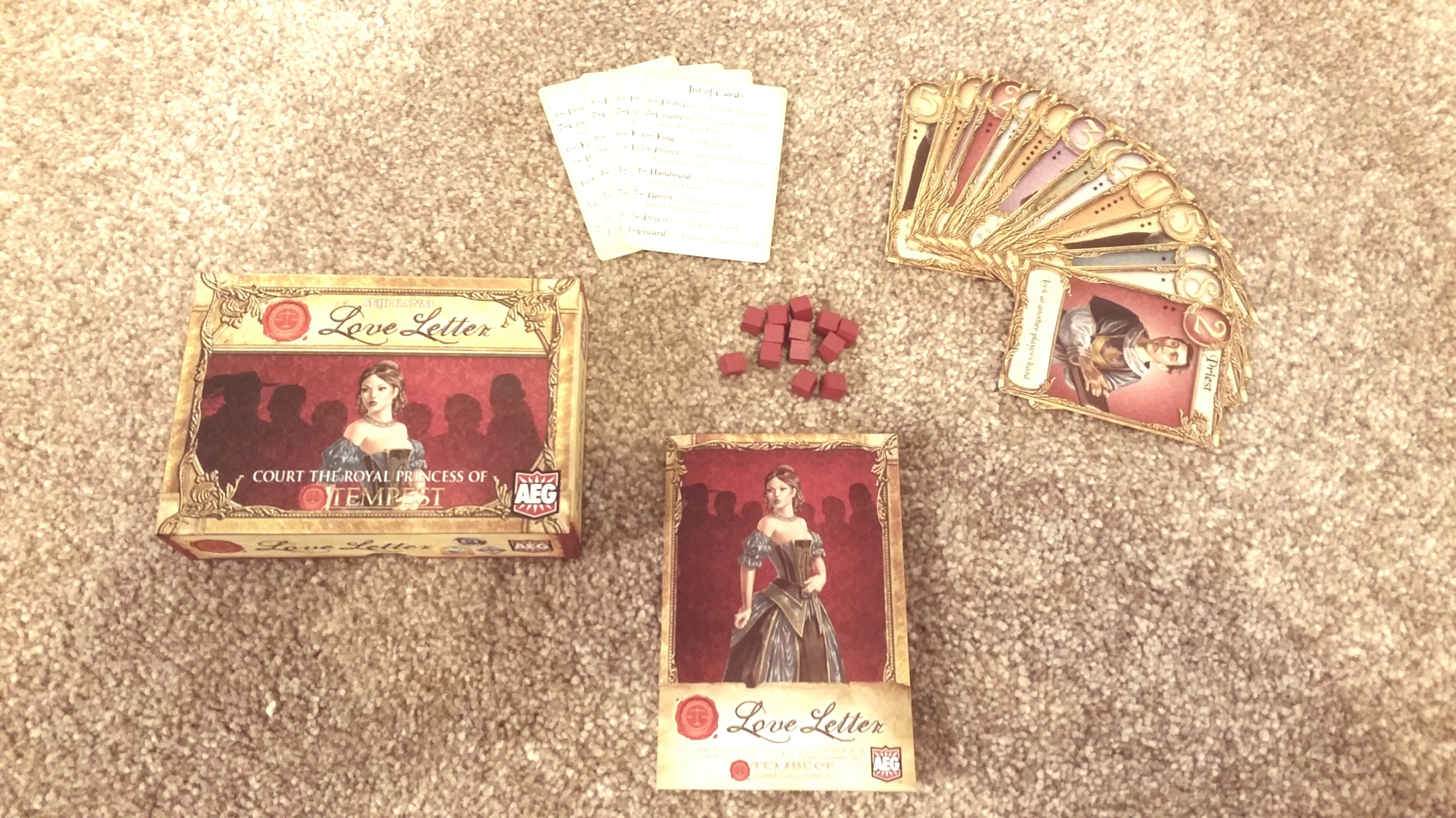 What is Love Letter?

Love Letter is a ‘microgame.’ These are pretty popular right now thanks to the likes of Tiny Epic Kingdoms and Coin Age, and I’ve heard it said that the economy is partly to thank for this. We just can’t afford some of the high prices charged for larger games right now.

I guess that’s partly true, and for me there’s something neat about a small game. It takes real talent to make a smaller game that’s well thought out, complex enough to be challenging yet usually simple to fit onto a few cards or tokens.

The original Love Letter (there are lots of alternative versions which maybe weaken the brand a bit – Batman Love Letter, The Hobbit Love Letter) is widely regarded as a modern classic, and its been on my shelf for a while. I just hadn’t had a chance to play it. I’m glad I did.

This could not be much simpler. You get a handful of cards, and a rule card for each player, plus little red cubes known as tokens of affection.

The theme sees players attempting to deliver a love letter to the princes. The player closest at the end of a round wins a token. When one player has enough tokens, the game ends.

In reality what this means is that players have one card in their hand at the start of each turn. Then, in the words of Fluxx, ‘draw one play one.’

Each card is a character – a Baron, King, Guard, Princess etc. There are different numbers of each character card in the deck, and each has a unique action players can take.

Guards, for instance, allow players to guess whether an opponent has a particular card.

Once a card is played, it goes face up on the table. This way players quickly build up an idea of what cards have been played and what could be in their opponents’ hands.

This is where the thinky-bit happens. If you know how many Barons there are in the deck, and all but one are on the table, odds are good your opponent might have a Baron in their hand. If you draw a Guard you’re allowed to take a guess. Get it right, your opponent’s out.

Other cards give other actions, such as swapping a hand, allowing you to see an opponent’s hand or even being immune to your opponent’s cards.

I really enjoyed this. It’s a speedy little game, and sure there’s luck involved. But there’s also a surprising amount of skill for such a small game. It’s the type of game the word ‘elegant’ was created for.

Now, so far this blog has been pretty positive about all the games I play. I’m not lucky enough to be sent review copies of games, so I buy them all or receive them as gifts. So I do my research and get games I think I’m gonna like. Anything else would be weird.

I first played Love Letter as a three player. I know this blog’s about two player games but when I have a larger gaming group available its nice to try something a little different.

I loved it as a three player, but couldn’t imagine it as a two player. How could it work? If you compare hands with another player, you can win next go as you know what cards they have.

But when I played it as a two player, it worked fine.

What seem like weaknesses are actually elements that make the game fun and challenging. Sure, rounds can be over fast, but so what, its a microgames that costs a few dollars / pounds. I just found myself laughing and setting up for another round.

So yeah. I think it does work. Just be prepared for a faster game.