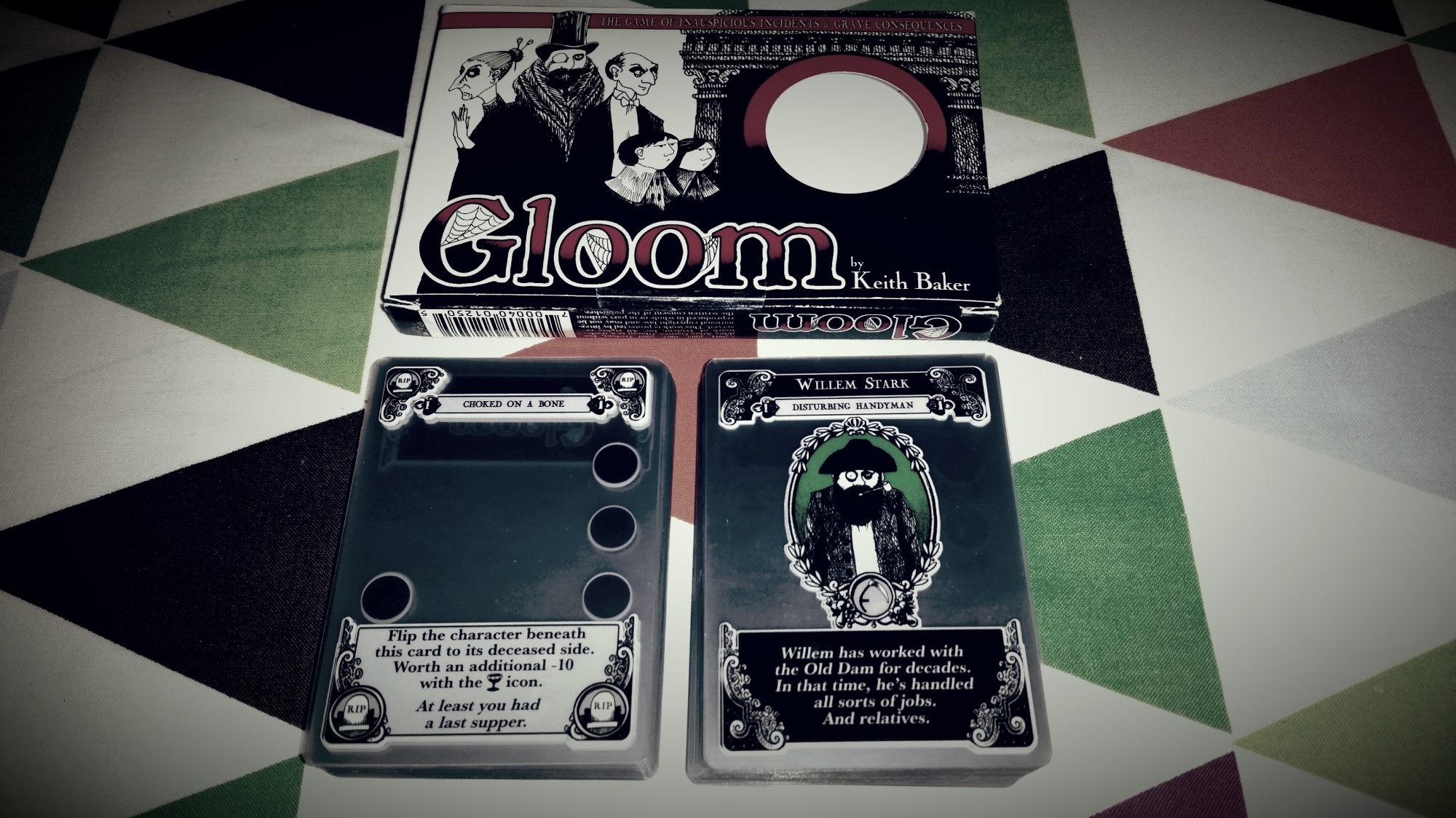 Now the season of goodwill is over, the trees are down and life settling back to a routine, it’s time to play Gloom.

This is a seriously unusual card game. It appeals to my sense of humour (dry, dark – or so I’m told) and my like of unusual games.

Gloom is like no other game I’ve ever seen. Now, as a former journalist and someone who still writes for a living, I hate to call anything unique, as odds are it’s not. Correct me if I’m wrong, but I think this game may be.

In the box you get a lot of cards. These cards are all made of clear plastic, so when they’re placed on top of each other the wording or images below are still visible. A great mechanic.

To play Gloom, each player selects a family. The object of the game is to ensure unpleasant events happen to them, and then members of the family meet an untimely death.

Gloom is for two to four players. There are four families to choose from, each colour-coded.

You’ll get a kick out of reading the text on these cards: ‘Cousin Mordecai, the red-headed stepchild – Inbreeding is the least of his worries.’ Or ‘Ellias E. Gorr, itinerant gravedigger – It can be hard for a traveling grave digger to find jobs, but there’s always work at Castle Slogar.’

Gameplay is simple. Each turn a player may play or discard up to two cards, before drawing their hand back up.

The strategy comes in deciding which types of card to play.

Now, the point of the game is to ensure bad things happen to your characters, giving them negative ‘pathos points’ before killing them. Once a whole family is wiped out, the game ends.

However, positive points are also available, handy for screwing up an opponents plans. Characters must have a negative ‘self worth’ score when all pathos points are added up, before they can be killed off.

Players can place untimely death cards on their opponents’ characters too.

E.g. you place a measly -10 pathos points on an opponents character then kill him off. That character will only be worth -10 when points are added up at the end of the game.

Meanwhile, you’re busy adding negative points to your own character meaning he’s reached -25. If he’s then killed, that will be worth more at the end of the game.

The flavour text on the cards is great. One reads ‘Was taunted by tigers. Skip your next draw phase after this card is played.’ Sounds bad? But its worth -30 points so it’s worth skipping a draw phase.

So I guess there’s nothing that unusual about the mechanic of the game. Placing cards to affect your opponents hand, etc etc. With Gloom though, its all about the theme. Which is dark and funny.

The instructions also encourage players to craft stories around the cards which are being played, and while I’ve not tried this I can see how it would work.

It does. I think it’s a strong game with two.

With more players, and I’ve tried with four, you have more choice of whose characters to affect, and you’ll need to keep an eye on three other sets of character cards to make sure those negative points aren’t building up too high.

But having two streamlines gameplay and that’s no bad thing. Recommended.

Watch Will Wheaton’s Tabletop play through a game here.