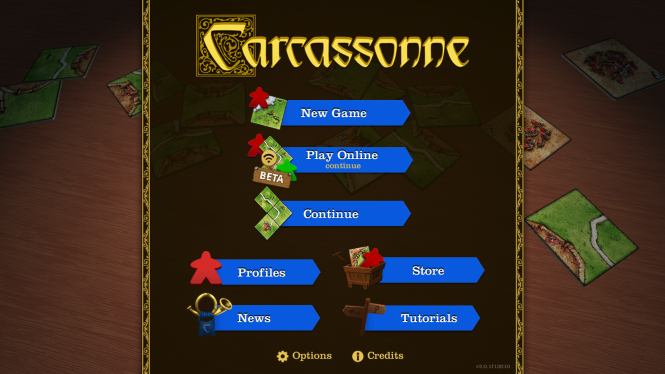 What is Carcassonne for Android?

Recently I’ve been checking out Android versions of tabletop games.

The first, by a twist of fate, being Carcassonne. This was also the first tabletop game I ever bought.

The mobile version has been around for a while on both iOS and Android, but currently it’s available for just 99p on the Amazon app store. At that price it was a no-brainer. EDIT it’s no longer at that price.

It’s a neat little translation of the game that’s very faithful to the real version.

I won’t go into a detailed description of the game but for any one who hasn’t played it, this is a fairly light Euro game. You can see my review of the real thing here.

Players lay tiles to build a landscape of fields, roads and cities, placing followers as they go. You gain points for completed features.

The mobile version has all the same tiles and so far there are currently four expansions available which match some of the real world counterparts. They’re not cheap, but that’s standard for in-app purchases. I’ve no idea if any more are due.

I like this version. You can play solo, multiplayer online or against a real-life opponent by passing your device around.

The first thing I noticed is the speed you’ll play this. I’ve had games of the real carcassonne last hours. Literally hours. But I get through the mobile version in five or ten minutes.

This is partly due to the computer opponent making their move instantly. No waiting around.

It’s also partly due to the game giving you hints as to where you can play your tiles next. You don’t need to spend time scanning the play area for available options.

This is both a positive and a negative. Yes, it makes the game quicker and that’s nice on a mobile device. However, it takes some of the strategy out of the game. No missing that vital move any more.

I also get very frustrated at the little ‘comments’ made between turns by the computer player avatars. I believe you can turn them off but I haven’t checked yet. They just hold the game up and usually make absolutely no sense.

Scoring is a major positive though. It’s all done automatically so no more searching the board for ages to score your farmers.

Is it good for two players?

If you don’t mind passing your device around, yes it is. It would be great to have a local multiplayer system as an option.

For me, it really comes into its own as a solo game.

It’s simply a very good version of the classic game. Its great for a quick game at a lunch break or on the train, and I really enjoy it. The price also helped of course.

I reccomend this one.

You can find the game in the UK Amazon app store here and the US store here.